HD 6900 and EQAA support coming on next build

EQAA or Enhanced Quality Anti-Anliasing mode of HD 6900 series is going to be supported on next build. If I can find information about power modes (-20 to +20%) that will be added as well. 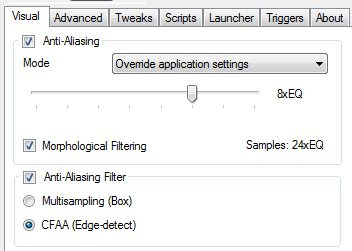 PS: Unfortunately I don't have an HD 6900 card to test, if someone at AMD is reading this, please send me a Cayman sample! :-P
Posted by John at 1:10 AM 4 comments:

The User's Manual is here!

Yeah, it's ready! Check it out:

It's still a work in progress but you can access it and give me some feedback on how to improve it.

Published with Blogger-droid v1.6.5
Posted by John at 3:03 PM No comments:

A sneak-peek over the new RadeonPro user's manual

The screenshot above is from my HD 5970 and a bit of registry editing, although  it's very easy to have the option available, the sad news is EQAA seems to work only on Cayman equipped boards... that's due to dependencies on features found only on new Cayman's Render-back ends (aka ROPs), so it's not a software feature that could be implemented on drivers as most of us were expecting.
RadeonPro is going to support EQAA, but only for Cayman equipped boards.
Posted by John at 12:25 AM 1 comment:

- Changed: MLAA and new features are activated even when some registry keys are missing
- Changed: Windows XP users can use profiles when a Radeon graphics card is not detected (temporary measure to allow program utilization on Windows XP)

If you are not experiencing any of those issues you can safely skip this update.
Posted by John at 1:23 PM No comments:

- Fixed: AMD logo always displayed on OpenGL games
- Fixed: registry read errors at program startup
- Fixed: Windows XP registry access error at startup causing the program to end prematurely
- Fixed: incorrect FPS counter on some D3D9 games (NFS Pro Street, ARMA II and others). Please note that some games (e.g. Dragon Age) may not display the FPS counter in some places. It will be fixed in a future build.
- Changed: new drivers features (MLAA, TFQ and SFO) are activated regardless driver support when an HD 5000 series or newer card is detected
- New: a LOG file can be created at startup if the Scroll-lock key is kept pressed during RadeonPro initialization. The LOG file can be found at "My Documents\RadeonPro"

If you don't have any of those issues you can safely wait for the next build.

Yeah, but nothing new on this build, it's just a bug fix release to correct some annoying bugs.

More to come on next build 1.0.12.0, planned for release 'till the end of month, which includes the web site Community feature integrated to the program, better control over OSD elements and online user's manual integration.
Posted by John at 6:28 PM No comments:

I've used to blog using Blogger and tried Wordpress this time, but the WP site is too slow and every customization is not free as it's on Blogger, even the simpliest ones like editing the template CSS... so I'm back to Blogger!

Wordpress may be a better blogging platform, but for my basic needs it seems Blogger fits better.
Published with Blogger-droid v1.6.5
Posted by John at 2:42 PM No comments:

MLAA: do you use it?

Since Catalyst 10.10a, AMD gave us a nifty toy: Morphological Filtering, or MLAA, a different kind of anti-aliasing that works on every game out there, from DX8 to DX11, with a small performance hit compared to forced MSAA on games that use deferred rendering (the main target of MLAA). There are a lot of games that use graphics engines that make difficult to use traditional multisampling anti-aliasing (Unreal Engine 3, for example), and for them we depend on some driver support to be able to make the graphics more beautiful... all because we are PC gamers and we hate jaggies, right? :-P

Back to the subject, MLAA technique employed by Catalyst driver is handy because it works as a post processing filter, the driver removes the jaggies after the graphics engine sends the entire frame to the video and before sending the image to the monitor, in a totally transparent way to the game. The performance hit varies a lot depending on the game and the results are very good most of time, the only drawback is some small text that gets blurried too much, making it difficult to read. Another downside is the compatibility: as the current implementation relies on DirectCompute 11, it works only on DirectX 11 capable hardware, in other words, no support for HD 4000 series and previous cards.

Here's an example of MLAA working on Star Craft 2

As you can see on animation above, the jaggies are gone with MLAA applied, making the world moar beautiful \o/

I don't play SC2, but I'm using MLAA on NFS Hot Pursuit and love the results, but I feel a bit sad as Criterion could implement anti-aliasing on the game engine itself.

So, are you enjoying MLAA on your Radeon graphics card? What do you think about it?
Posted by John at 8:04 PM 5 comments:

I'm testing now a few fixes reported by users through the bug report and web forums, say goodbye to the AMD logo always visible on OpenGL games and other bugs.

The update will be available next week.
Posted by John at 11:45 AM No comments:

Email ThisBlogThis!Share to TwitterShare to FacebookShare to Pinterest
Labels: RadeonPro

As you may know already, RadeonPro got a new web site since build 1.0.11.00 release, I hope you like it!

The Games section is what I'm planning for the profiles sharing, only a few games does exist on database now but new ones will be added on demand, meaning when an user tries to share a profile or query for one from the RadeonPro program interface and the game isn't available, I'll be notified so I can do the database input work. Seems to be a lot of work at first sight, but let's see for a while how this goes work.

I'm finishing now the OpenID and OAuth authentication routines to let users login using their OpenID/OAuth enabled accounts (Google, Facebook, Twitter, Yahoo, etc.),  so they can use the Community feature without having to keep one more password to remember.

It will be available next week.
Posted by John at 10:59 AM No comments:

RadeonPro's updates will be published here too, feel free to leave your feedback, suggestions and whatnot about the program.
Posted by John at 10:05 AM No comments: